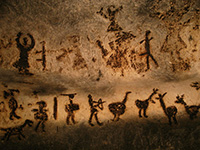 Treatment of leather is undoubtedly one of the oldest human activity. Naturally skin is the first material from which people are creating clothes and shoes.

Cave paintings from the Stone Age show hunters, dressed in furs. It is found numerous tools for their treatment, which speaks that the leather garments were used a lot in the early history.

At the same time, the oldest discovered leather shoe is a kind of moccasin made of lambskin. Found in Armenia and, according to radio carbonate dating, should be referred to the third millennium BC. Striking is that according to ethnographers, the shoe is not much different from traditional shoes – leather shoes, named carvuli,  inherent to the peoples of the Balkans, which today are still part of the traditional clothing, especially during the feasts and festivals.

There are ancient written sources, the earliest of which are Assyrian texts, that describe various methods for leather treatment. One of the primary techniques was by smoking. Later, people find out that they can make them dry, exposing them to the sun or treated them with salt.

It is interesting to note that in Sumer, seven thousand years ago, long robes and tiaras for the ladies were made by leather. And the leather glove probably first appeare in ancient Egypt.

LEATHER GARMENTS IN THE MIDDLE AGES

Skipping centuries, we move to Spain in the eighth century during the domination of the Moors. The discovery of revolutionary for its time treatment method that gives the leather a pleasant characteristic flavor leads to distribution of leather products, and in particular clothes and shoes throughout Europe, making leather clothing preferred for centuries.

In addition to household leather goods are widespread and in warfare. From armor, helmets, belts and shoes, through shields and arrows quivers to trimming of battering rams.

EATHER GARMENTS IN THE PAST CENTURY

By the beginning of the last century production of leather garments is happening mostly in small private workshops or weapons. A major problem of the leather making was the very long period that was needed for quality tanning, as it took from eight months to a year. Then, in the early 20th century – perhaps accidentally, as most of the innovations were discovered, it was found out that the treatment of the skin with chrome is shortening dramatically the tanning.

Nowadays, thanks to this discovery, leather garment is ready to use just a month after the skin is exposed to initial treatment.

This is already the basis for expansion of leather garments, such as production of small workshops moved to the big industry.

Emblematic part of modern clothing is the famous leather jacket. Although today it is a symbol of style and identity, its appearance at the beginning of the last century is due to practical necessity. Since leather is windproof, warm well and is a breathable material, it is widely used by the German air force pilots during the First World War.

Practicality and fashion “are meeting eachother” in 1928 when designer Scott Irving – creator of the waterproof clothes, presents the first motorcycle jacket, custom-made for Harley Davidson. Several years later, on the eve of the last World War, the leather bomber jacket became a symbol of American pilots. With almost the same design we can see it in the movie “Top Gun” in the mid 80-ies of XX century.

From the 60-ies until now the flagship of the leather industry was widely popular in the sub-culture, it became a symbol of rebellion and diversity. Great contribution to this brings an iconic picture of Marlon Brando as tough boy, riding a powerful motorcycle and dressed from head to toe  in leather. 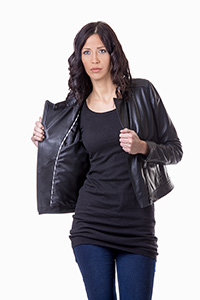 In the next years leather garments are entering for real into the styling of rock bands, and a little bit later, in the era of MTV, thanks to the legendary Michael Jackson and his videos, where he often appears with leather garments, the leather comes into the mainstream.

Today, despite the massive industrial production of synthetic materials, leather products remain a factor in the market, as the biggest brands continue to present selected collections made of genuine leather.

By continuing to use the site, you agree to the use of cookies .